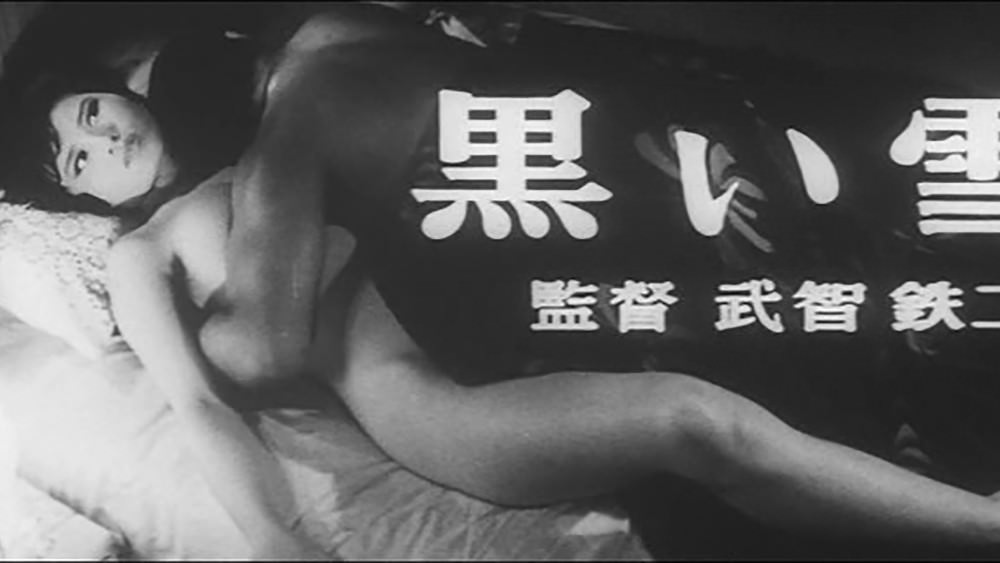 Black Snow (Kuroi Yuki, 1965) is significant as the first film subject to a trial under obscenity law despite having passed inspection by Eirin. The film’s director, Takechi Tesuji, and the head of the Nikkatsu distribution office were charged with obscenity and subject to two trials that concluded on 17 September 1969, four years following the film’s initial release (Cather 2012). Takechi had previously been the subject of controversy, in relation to his 1964 film Daydream (Hakujitsumu), a pink film focused on a nightclub performer’s sexual fantasies in a dentist’s waiting room (remade by Takechi as Japan’s first hardcore pornographic film in 1981, starring Aizome Kyōko).

In Black Snow, the young protagonist, Jiro, is the son of a madam who owns a brothel adjacent to the U.S. Yokota Air Base. In the opening scene, a slow panning shot reveals a post-coital embrace between Jiro’s mother and an African-American G.I., who he soon stabs to death, before robbing and murdering his Aunty, who had also profited from the adjacent air base through a bar that sold stolen goods (Standish 2011). Jiro is unable to become aroused without fondling a loaded pistol, and when he is expected to consummate a new romance with his love interest Shizue, he substitutes a friend for himself in the darkness. When Shizue realises who she has lost her virginity to, she runs naked into the cold and through the snow alongside the fence of the air base. This three-minute scene is the most memorable in Black Snow, and clearly emphasises the critique of ongoing U.S. imperialism in Japan, and the Japanese state’s complicity in this, alongside real-world protests about the renewal of the Treaty of Mutual Cooperation and Security between the United States and Japan (“ANPO”).

Black Snow opened for exhibition in Nikkatsu cinemas across Japan on 9 June 1965 and screened until police seized the prints on 16 June under Article 175 of the Criminal Code (Standish 2011). The film is steeped in references to the ongoing presence of U.S. military forces in Japan – including bilingual signs, an Elvis Presley poster, a western movie playing in a cinema, and the air base itself – and the combination of nudity and the anti-imperialist message seems to have contributed to the obscenity charge. Important arts figures from across the political spectrum (such as Mishima Yukio and Oshima Nagisa) defended Takechi in public and as witnesses. Takechi defended his use of nudity on political grounds: “I admit there are many nude scenes in the film, but they are psychological nude scenes symbolizing the defenselessness of the Japanese people in the face of the American invasion” (in Sharp 2008, 41). Critics such as the Tokyo Mothers’ Association disagreed in the lower court trial, claiming the film “was nothing more than one that will tempt youths to evil and do insult to women”, which the High Court judges found a reasonable assertion given apparently inconsistent application of the film’s adult rating by theaters (in Cather 2014, 126-127). While Eirin implemented a public relations strategy including apologising in newspapers, developing a set of stricter “New Regulations” in 1965, and appearing as a prosecution witness, it was nonetheless subject to scrutiny, including police filing documents to the public prosecutor requesting the indictment of various Eirin staff (Cather 2014). While no convictions for obscenity were achieved in the trials, Kirsten Cather (2014, 129) writes that “the Black Snow trial clearly indicated that Eirin’s seal of approval was no future guarantee of immunity from state prosecution for either filmmakers or Eirin itself”. – Liam Grealy