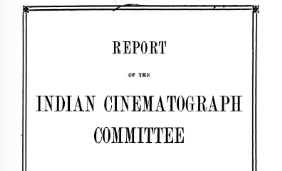 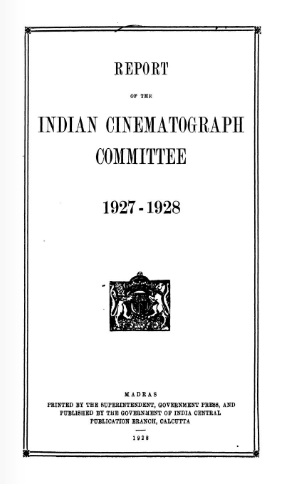 The 1928 Report of the Indian Cinematograph Committee (“Report”) has been described as “the most comprehensive document extant on the formation of a film industry in a non-Western country” (Shoesmith 1988, 74). Its terms of reference included the following:
“(1) to examine the organisation and the principles and methods of the censorship of cinematograph films in India;
(2) to survey the organisation for the exhibition of cinematograph films and the film-producing industry in India;
(3) to consider whether it is desirable that steps should be taken to encourage the exhibition of films produced within the British Empire generally and the production and exhibition of Indian films in particular; and to make recommendations.” (ICC 1928, xii)
This scope reflected the objects of the Cinematograph Act 1918, which sought to provide for the safety of audiences and to prevent the exhibition of objectionable films (ICC 1928, 105).

A number of factors contributed to the political climate surrounding the formation of the Indian Cinematograph Committee (ICC) in 1927. The Government of India Act 1919 (implemented in 1921) made India’s Central Legislative Council bicameral, increasing Indian representation, and extending the franchise to five million Indians. The Simon Commission of 1927-28 sought to review these reforms, but was protested across India for lacking Indian representation on its committee (Jaikumar 2006). In 1926, the British Social Hygiene Council (formerly the National Council for Combating Venereal Disease) sent a delegation to India to assess the contents and effects of cinema. A memorandum to government written by delegate Mrs. C. Neville Rolfe, as well as Constance Bromley’s infamous article in the Leeds Mercury, “Films that lower our prestige in India: Imperilling the prestige of the white woman”, contributed to British concern about the effects of films in its colony (Arora 1995). Further, at the British Imperial Conference in England in 1926, discussion considered complaints made by the Federation of British Industries to the board of trade about the dominance of American films in India (Liang et al. 2007). In the 1920s, almost 80 per cent of exhibited films in India were imported from the United States (ICC 1928, 102-103). Therefore, both cultural and economic concerns, about film but also about shifting colonial relations more generally, underpinned the 1927 resolution of the British Legislative Committee to “examine and report on the system of censorship of cinematograph films in India and to consider whether it is desirable that any steps be taken to encourage the exhibition of films produced within the British Empire generally and the production and exhibition of Indian films in particular” (in Sharma 2009, 62). Priya Jaikumar (2006) suggests that critical work on the ICC has focused primarily on concerns about representations in Hollywood films, without giving due consideration to Britain’s push to establish a quota for its own films in India via this committee.

The ICC was chaired by Diwan Badahur T. Rangachariah, of the Madras High Court, and composed of a mix of Indian and British public and private figures (see Shoesmith 1988 for a detailed overview). The Report was based on data gathered by travelling to India’s major film centres, through methods such as written questionnaires and open-ended interview questions, and by attending 57 feature length films at 45 cinemas. 4325 questionnaires were distributed from which the ICC received 320 written responses. The ICC also interviewed 353 participants, characterised in terms of the communities they were presumed to represent: 239 Indians including 157 Hindus, 38 Muslims, 25 Parsis, 16 Burmese, 2 Sikhs and 1 Christian; 114 Europeans, Anglo-Indians, and Americans; and 35 “ladies” (19 of whom were Indian) (ICC 1928, 13). The interviewees included a broad range of stakeholders in Indian cinema, including government officials, producers, exhibitors, actors, importers, journalists, educationalists, school principals, and community figures such as a British president of the YMCA and a representative of the Bombay Vigilance Society. Jaikumar writes that despite the diversity of occupations represented in the Report, “witnesses were primarily men, those identified as respectable community members or those who could function as authoritative experts and specialists. Mass Indian film viewers, the largest growing constituency of silent films in India, were excluded” (2006, 72). In its attempt to manage Indian cinema’s unruly expansion, and evident through the Report’s exclusive use of English, this colonial investigation thus established a continuing interest to regulate Indian cinema on behalf of protecting the supposedly vulnerable, illiterate Indian masses: “urban, rural, and moffusil constituencies of mass Indian cinema-goers are commented on and statistically calibrated rather than included in their own voices, because they cannot be accommodated among a body of experts” (Jaikumar 2006, 94).

The Report formalised a central Indian discourse on the power of the cinema and the need for censorship:
“On the one hand it has been found necessary in most countries to institute some form of censorship in order to control and, as far as possible, to eradicate the evil effects of the cinema; on the other hand, enquiries have been made for the purpose of ascertaining how far and by what means the cinema can be utilised as a medium of enlightenment and entertainment.” (ICC 1928, 1)
The ICC also noted that many of those interviewed who claimed the cinema was “a demoralising influence” had rarely visited cinemas themselves, considering films “harmful, inartistic or boring” (ICC 1928, 110). Better informed opinions stressed concerns that “the cinema emphasises the lower side of life and the cruder passions of mankind, and must therefore tend to lower morality and to inflame passions” (ICC 1928, 110). Responding to complaints from the film industry about inconsistent and region-specific censorship practices, the ICC recommended a central board of film censors: “We are agreed that the ideal solution will be a Central Board of Censors for the whole of British India” (ICC 1928, 121). The Report also sought opinions on young people and film consumption, illustrated by the following questions from the questionnaire:
“2.a In your experience to what extent do Indians (1) of the educated classes and (2) of the illiterate classes frequent cinemas? To what extent is such attendance on the increase (Please explain to what place or area your answers refer)
b. Can you give an idea of the composition of an average cinema audience in the locality of which you speak?
c. what proportions of the audiences consists of children under 14 or adolescents of impressionable age?” (Liang 2007, 39)
Further, the Report recommended the introduction of the classification categories “U”, Universal, and “A”, Adult, ultimately established under the Cinematograph (Amendment) Act 1949 [CHECK; RE MEHTA 2011, 32]. Unlike the eventual category, however, the ICC did not recommend that “A” should be a restrictive category, noting that “Such certification would only serve as an advertisement to the prurient, and it would be a matter of the greatest difficulty, both for exhibitors and the Police, to ensure that non-adults, however defined, did not fain admittance” (ICC 1928, 130). Rather than the state holding primary responsibility for young people’s media consumption, the ICC noted that parents and guardians should “protect them and keep them from harmful entertainment” (1928, 155).

As it undertook its investigation the ICC experienced suspicion about its motives, in particular regarding the possible establishment of a preferential quota for Empire (British) films in the Indian market. While only two of the 45 questions in the ICC questionnaire addressed a possible quota, these drew the ire of interviewees from the film industry, some of whom felt Indian filmmakers were already at a disadvantage due to high taxes placed on imports of raw film stock. The questionnaire asked:
“22. Should India participate in the policy outlined in the resolution of the Imperial Conference to give some measure of encouragement to British Empire films, and if so would such participation (a) assist the development of her own film industry, (b) assist in making herself better known and understood throughout the Empire and the world, and (c) improve the standard of Western films shown in India. Have you any suggestions as to the methods of putting such a policy into practice and the limitation if any?”
Responses were mostly highly critical of this possibility, suggesting that British culture was prevalent enough in India and required no additional support.

In the years immediately following the Report’s publication, none of its recommendations were enacted into law (Sharma 2009). While the Report was circulated among Indian government departments until 1932 (Shoesmith 1988), the centralisation of film censorship would not occur until after national independence. Regarding concerns about the representation of white people, especially women, on cinema screens, the ICC considered that this produced minimal harm; as ICC and Bombay Censor Board member A.M. Green noted: “If the illiterate do not understand [the sex represented in ‘Social’ films] and the literate do not mind it or are not affected by it, there does not seem to be very much reason to object to it?” (ICC 1928, 2: 273). Apart from recommending the centralisation of censorship, the ICC ultimately failed to support a preferential quota for British films, suggesting that India already had sufficient access to British ideas and that such a decision should be left to the Indian legislature. Instead, it recommended support for the Indian film industry in the form of a quota for Indian-made films in Britain, in combination stifling any legislative or policy change. Nonetheless, such conclusions constituted a challenge to colonial interventions in Indian film and governance more generally, while illustrating concerns that would remain central to Indian film regulation across the twentieth century, such as cinema’s educative and entertainment potentials, the protection of minors, consistency of governmental across India, and the place of cinema alongside other media. – Liam Grealy