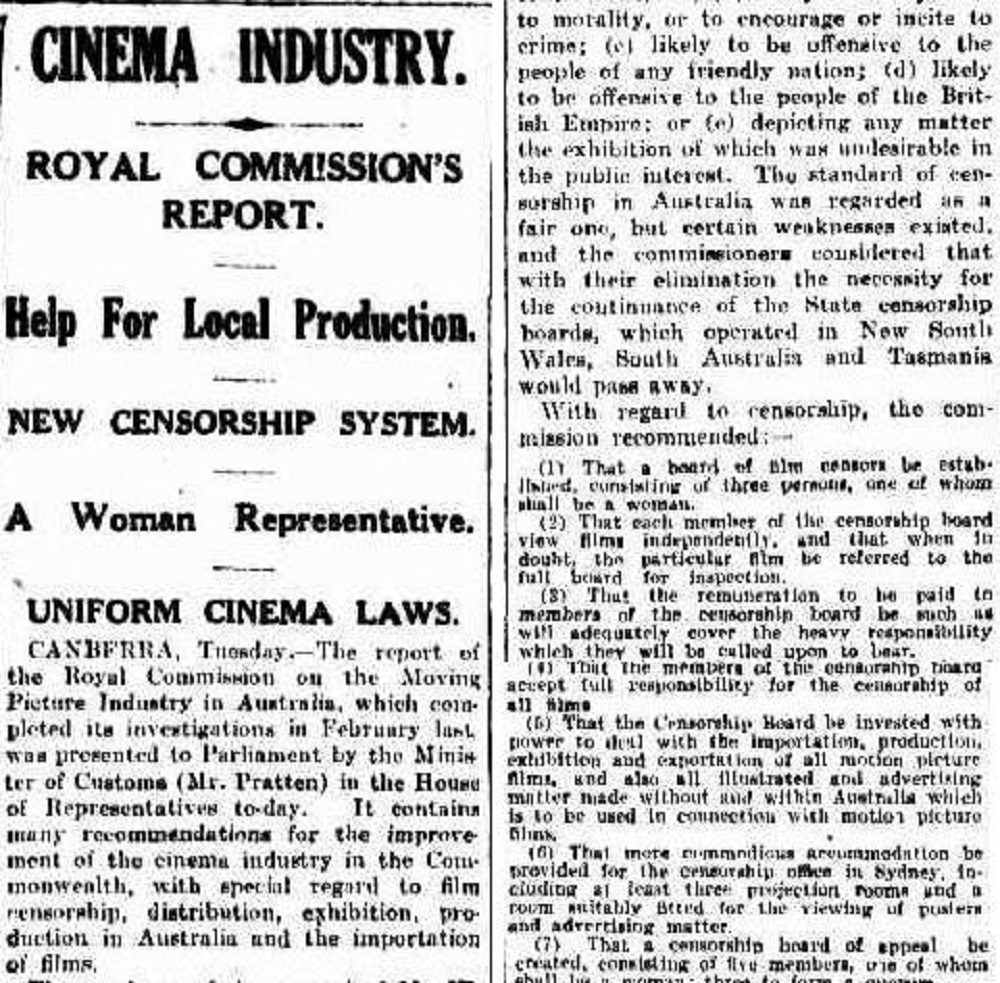 In the 1920s, U.S. dominance of the film market and their capacity to produce popular cinema made it difficult for British and Australian productions to compete. There were also many concerns regarding the effects of American products on young people. A federal Royal Commission was established and led by Walter Moffitt Marks to consider the how to boost the Australian film industry. They were very suspicious of the Australian Motion Picture Distributors’ Association (MPDA) which had begun to represent the interests of U.S. distribution companies in this region. MPDA President Victor Wilson had to answer questions about an American “combine” suppressing Australian local productions (Minutes of Evidence from Royal Commission, p7). “Block-booking”, a system where exhibitors booked pictures 12 months in advance, was also thought to be suppressing local productions from being screened. The Commonwealth Board of Censors, consisting of a Chief Censor in Melbourne and another censor in Sydney, hoped that a quota on films from the British Empire would encourage British and Australian productions and counteract the influence of U.S. films on young Australians (a particular concern after the advent of the “talkies” in 1928 [CFCB, 1930, p6; Damousi, 2007]). British films, however, came with their own perceived problems; they were often criticised by the Censorship Board as in need of improvement “from the point of view of entertainment, technical excellence and censorship standards” (Annual Report, 1929, p5).

Outcomes of the Commission included the introduction of a system of age classification, whereby films were identified as either for universal exhibition or “Adults only”, to be determined by the censorship authority. The classifications of G, for general exhibition, and A, suitable only for Adults, were in use in states that had adopted Commonwealth censorship from 1929. In addition to giving testimony in the Royal Commission, women had been vocal on the issue of film censorship and child protection, organising around such issues since early in film’s inception. Mary Tomsic (2014) describes this presence as “maternal citizenship”, a form of citizenship inscribed with the guardianship of children that also represented early examples of women’s leadership. The Commission recommended the Board of Censors become the Commonwealth Film Censorship Board (CFCB), to consist of three members including one woman. The CFCB would make decisions alongside an Appeal Board consisting of five members, which should also include one woman.

The Commission concluded in 1928, the same year Walter Cresswell O’Reilly commenced in the position of Commonwealth Chief Censor and the Board moved to permanently reside in Sydney. O’Reilly would become an influential figure in the maintenance of Australian censorship standards, described by the Royal Commission as the strictest in the world. Another recommendation was for uniform censorship laws throughout Australia – this recommendation would take a lot longer to be realised. – Rachel Cole

National Archives of Australia file. NAA: A11636, 4/1, Title: “Bound printed copy of Minutes of Evidence of the Royal Commission on the Moving Picture Industry in Australia (one of two copies)”.