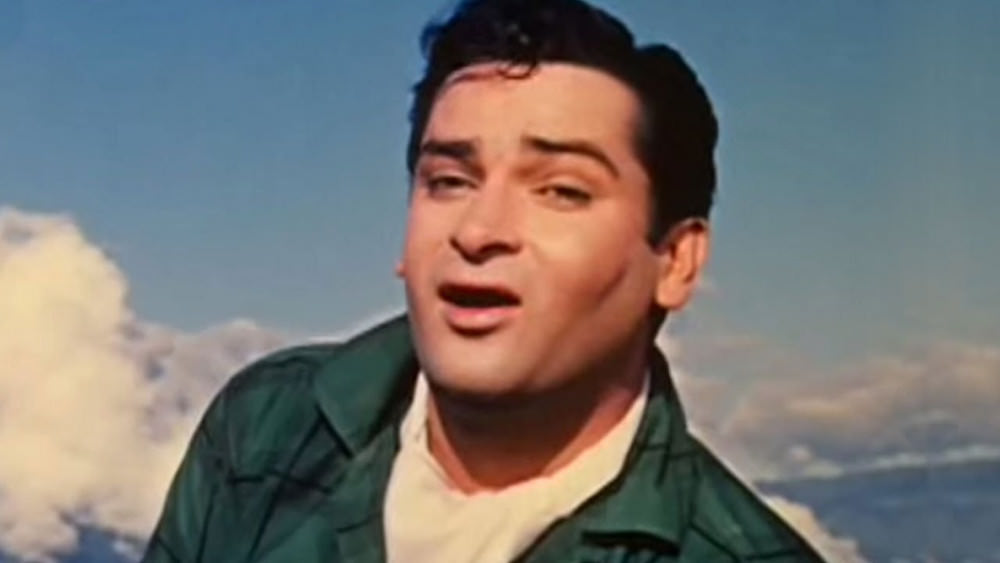 Shammi Kapoor (born Shamsher Raj Kapoor) was an Indian film actor and director from the famous filmmaking Kapoor family, including father Prithviraj and brothers Raj and Shashi. He is best known for his light-hearted and flamboyantly stylish roles in romantic Hindi films from the late 1950s to the early 1970s, beginning with director Nasir Hussain’s.Tumsa Nahin Dekha (1957), and also including Junglee (1961), appearing alongside Saira Banu in her Hindi film debut. Kapoor is colloquially known as the Elvis Presley of India for his dance routines, which he choreographed himself, and his style, including his trendy clothes and coiffed hair. In 1994, he was presented a Filmfare “Lifetime Achievement (Popular)” award.

Junglee (The Savage One, 1961) was Kapoor’s first colour movie and it cemented his stardom. Directed by Subodh Mukherjee, the light-hearted musical comedy was a major box office success, facilitated by the popular song “Yahoo! Chahe Mujhe Koi Junglee Kahen” (“Yahoo! Let them call me a savage if they so wish”). The film centres on Chandrashektar/Shektar (Kapoor), the humourless son of wealthy disciplinarians. His mother, who it is inferred did not experience love from her late husband, prohibits laughter in their household, conceived as a sign of the lower classes. Shektar’s charming younger sister Mala (played by Shashikala Om Prakesh Saigal) rejects this familial demand, falling in love with a local man, Jeevan, and requiring Shektar to take her away on his mother’s order. In Kashmir, Shektar meets Rajkumari (Saira Banu), who transforms his dour personality into the carefree perspective of a cinematic man in love, in particular following days trapped together in a cabin during a snowstorm (the “Yahoo” number recognises the storm’s conclusion and their safety). Following the birth of a son to Mala, who had previously wed Jeevan in secret, the siblings return home, Shektar and Rajkumari marry, and they laugh together as a family.

Sumita Chakravarty (1993, 207) suggests that Shammi Kapoor was “the first male star to break out of the mold of the fifties hero as champion and prototype of the underclass”, a trope sometimes referred to as the five-year plan hero in reference to the post-colonial state’s penchant for grandiose plans for national development. Corey Creekmur (2005) suggests that Shammi Kapoor introduced the figure of the Western teenager to Hindi cinema. Like the shift in youth representations in the Japanese “Taiyozoku” (Suntribe) films, Chakravarty (1993, 208) characterises Kapoor’s “vigorous narcissistic male persona” as substituting “social markers of class and region” with “a more free-floating and individualized universe of rapid change and frantic movement.” For Ashok Kavi (2000, 309), Kapoor’s hero was no longer “the repository of the traditional value system, which had shaped the Indian Renaissance and the struggle for India’s freedom; he was instead a fragile, faithful symbol of the younger Indian, born post-Independence.” Emphasising Kapoor’s camp stylisation, Kavi also suggests that Kapoor’s heroines “were mere appendages to this high drama of the eroticization of the male”, akin to the central focus on the Ishihara brothers’ physicality in the taiyozoku films Season of the Sun (1955) and Crazed Fruit (1956). For Ananya Jahanara Kabir (2005, 88), “the Shammi Kapoor body marks as its territory the hitherto amorphous middle ground between adulthood and childhood.”

In Junglee, Shektar’s early return from his business training in the US and the UK underpin his character’s worldliness, but also the orientation of its producers to global youth trends through “adopting superficial signs of hipness and rebellion” (Creekmur 2005, 359). Kapoor’s performance in Junglee, but also in films such as College Girl (1960) and Bluffmaster (1963), signaled his debt to Elvis and Hollywood more generally. Amit Rai (1994, 65) wants to read the Indian appropriation of Elvis as “mimicry of the colonizer/West” and as representing “the potential sabotage of domination”. That Shammi Kapoor is obviously not the “real” Elvis conveys the slippage that signifies the constructed nature of the original and the ambivalent relation between the West and former colony: “the fetishized symbol of the USA, Elvis, becomes a signifier for anti-government protest”, Rai thinks (1994, 66).

As well as reading the figure of Krishna alongside Elvis into Kapoor’s performances, as Rai does, the theme of hybridization, or in-betweenness, is evident in Junglee’s setting in Kashmir. Ananya Jahanara Kabir (2005, 83) suggests that Junglee was one of five early 1960s films that used the Kashmir Valley to express “a new youthful modernity for urban Indians”, including Shammi Kapoor’s Kashmir Ki Kali (The Bud of Kashmir, 1964). The Kashmir Valley is used across these films to forge a national audience through its framing as an internal Indian other, and to signify the in-between state of youth, as well as its capacity to invoke transformations, its fantastic qualities exaggerated through the newly introduced use of Eastmancolor. Kabir (2005, 89) writes, “The spectacular birth of the new Indian youth, immersed in leisure, pleasure, and conspicuous consumption, is unmistakeably wedded to Eastmancolor and to the Kashmir Valley”. In the eyes of “plains-dwelling” Indians, Kashmir comes to signify a spatial separation from India otherwise, a space where young people are separated from family obligations, and a catalyst for young love (Kabir 2005, 89). – Liam Grealy