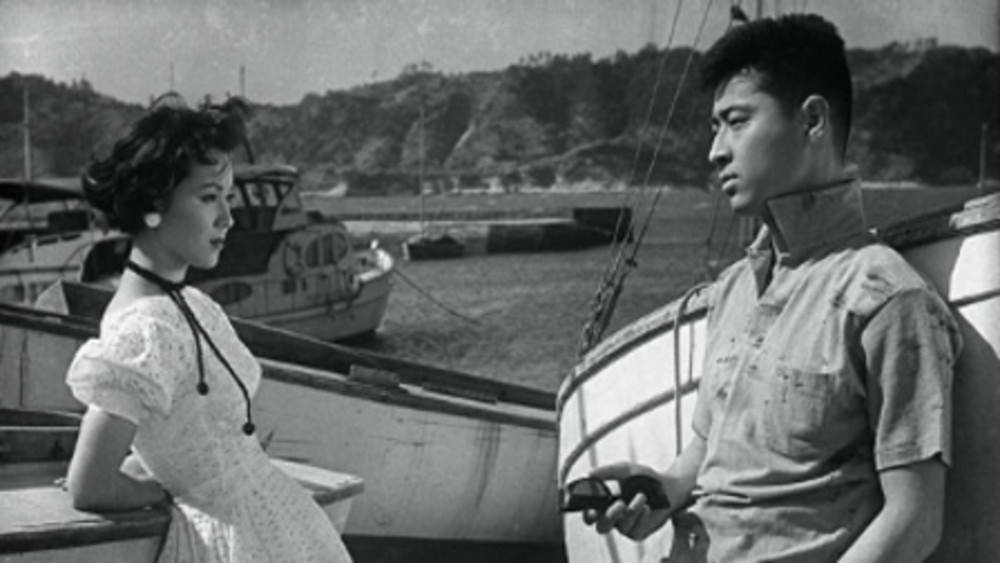 Season of the Sun is a classic Japanese story of problem youth. It has been released as a 1956 black-and-white film by Nikkatsu, an anime version in the 1986 collection Animated Classics of Japanese Literature, an 11-episode J-drama series in 2002, and a 2011 parody eroge game, Shouji Chinko Man no Kisetsu. Season of the Sun (Taiyō no Kisetsu) was first published as a novella in 1955, and translated into English in 1966 as Season of Violence. Its author was Shintarō Ishihara, the subsequent Governor of Tokyo from 1999 to 2012 and otherwise controversial far-right politician, who also starred in the original film. For his novella, Ishihara was awarded the prestigious Akutagawa Prize for literature in 1956, increasing its sales beyond 300,000 copies. It was both popular and controversial for its depictions of wealthy and rebellious post-war Japanese youth.

In the original novella and film versions, Tatsuya is a college student, talented boxer, and petty delinquent. He meets Eiko, who is his equally cavalier and reticent romantic match. After having sex on Tatsuya’s boat, they realise their deep feelings for one another, and Tatsuya responds with increased cruelty to Eiko, flaunting his other casual relationships and “selling” her to his brother, Michihisa, for 5000 yen. After Eiko discovers she is pregnant, Tatsuya’s inconsistency and subsequent rejection lead her to have a late abortion, which kills her. The cruelty of the protagonists, along with this dark ending, indicates the text’s exploitation of concerns over generational change and specifically the dissolution of formerly held moral values.

The focus on rebellious post-war youth is central. The tagline of the 1966 edition of the novella (published with two other short stories by Ishihara) describes the focus on “Japan’s infamous SUN TRIBE – teenagers who reject the morals of the past in favour of women, money and violence”. While the activities that Tatsuya, Eiko, and their wealthy friends engage in – drinking, sailing along the Shonan coast, fighting, and casual sex – were clearly not a mimetic representation of Japanese youth in 1956, the story was nonetheless consumed as an anti-authority text by college-age protesters of the era (Raine 2000). The 1956 film marked a distinct shift in representations of youth on Japanese cinema screens, from post-war films such as Akira Kurosawa’s No Regrets for Our Youth (1946), focused on WWII repression and the relative democratic freedoms under the U.S. occupation. Cultural critic Oya Soichi coined these new youth the “Taiyō-zoku” or “Sun-tribe”, as a reference to both their beach-oriented consumer lifestyles and the “Shayo-Zoku”, the post-WWII generation of formerly wealthy, land-owning families.

In the 1956 film, Nikkatsu returned to motion picture production, having been subsumed into Daiei during the WWII industry reorganisation. This reignited the studio, which subsequently became famous for its “pink” films in the 1960s and 1970s. There are only five Sun-tribe films proper, released across 1956, and including: Season of the Sun (Taiyo no kisetsu 1956, dir. Takumi Furukawa, studio: Nikkatsu), Backlight (Gyakukōsen 1956, dir. Takumi Furukawa, studio: Nikkatsu), Crazed Fruit (Kurutta Kajutsu 1956, dir. Kō Nakahira, studio: Nikkatsu), Summer in Eclipse (Nisshoku no Natsu 1956, dir. Hiromichi Horikawa, studio: Toho), and Punishment Room (Shokei no Heya 1956, dir. Kon Ichikawa, Daiei). These films clearly draw on the 1950s Hollywood “j.d.” films, while simultaneously testing new standards established by the occupation-era promotion of “cultural films” that featured new forms of sexuality, like such apparently democratic content as “kissing scenes”. As such, the taiyōzoku films were criticised as both juvenile and dangerous. Michael Raine cites the Japanese Minister of Education as declaring, in 1956 and in response to these films, that “Youth today has taiyōzoku tendencies – these must be removed!” (2001, 175). When Ishihara won his literary prize critics declared that Season of the Sun represented the contemporary Japanese situation in which “the ‘post-war’ is already over” (in Shamoon 2002, 3). The films all signal a dismissal of the older generation, figured as having disingenuously shifted from emperor worship to ineffective democracy and equally ineffective collective remorse (Shamoon 2002, 5). The forms of consumerism associated with the occupation’s idealised modernity populate the Sun Tribe films, which replace recognisably Japanese everyday objects with Western consumer culture – beds rather than futons, and jazz and boxing as leisure activities (Shamoon 2002, 6). But the most controversial aspect of the sun-tribe films were its representations of sex, which while not a new topic for Japanese cinema had typically been stressed in representations of socially marginal figures rather than college youth (Shamoon 2002, 7).

The taiyozoku films were surrounded by rumours of an imitative crime wave. “Fearing that such films were having a negative effect on children,” Deborah Shamoon (2002, 7) writes, “the PTA and housewives’ societies launched a campaign of public protest against the movie studios and succeeded in having students banned from viewing the films in two prefectures and four cities”. Protest groups and press campaigns condemned not only the films but Eirin as well, calling for new “laws to purge delinquent films” (Cather 2012, 83). It was key to the scandal of the sun tribe films that the industry regulator, Eirin, had approved them, and public protest often accused Eirin of not “enforcing rating restrictions” and “overly lenient inspections” motivated by sympathy and financial complicity with the studios (82-83). Thus the refinement of the Eirin classification system coalesced around a new categorisation of adulthood that might comprehend and withstand the sun tribe vision of youth. – Liam Grealy & Catherine Driscoll