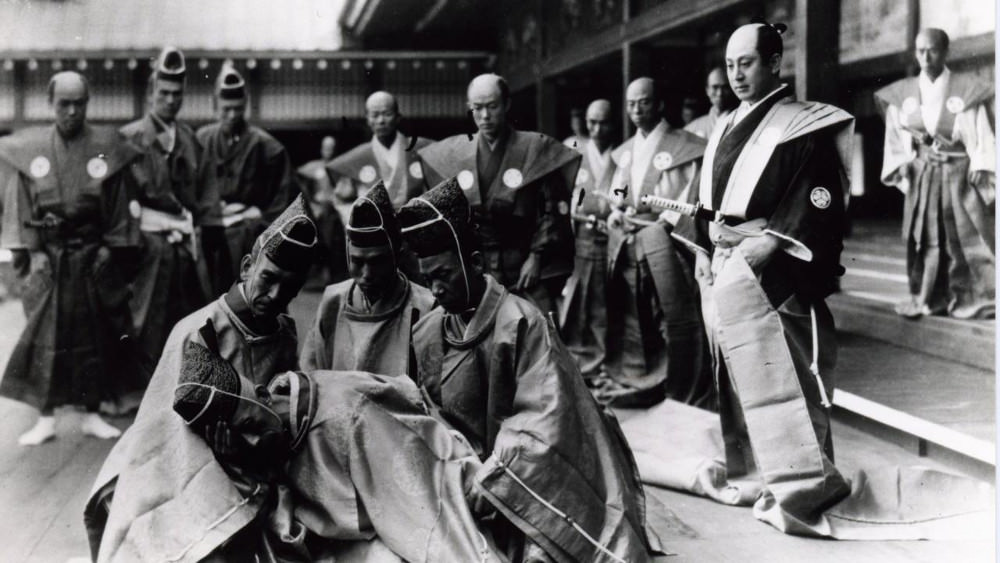 Directed by the revered Kenji Mizoguchi, The 47 Rōnin (Genroku Chūshingura Parts I and II) is the second of many film productions depicting one of Japan’s most well known historical stories. At its heart it centres on adherence to “bushido”, or the moral code of the samurai, in particular the performance of loyalty and sacrifice to ones master. In the actual 18th century historical events on which the subsequent accounts are based, two “daimyo” (feudal lords), Asano Naganori and Lord Kamei arrange a reception for Tokugawa Tsunayoshi Shogunate (1680-1709) officials at Edo Castle. Charged with instructing the younger daimyōs, the master of ceremonies Kira Kozuke-no-Suke insults them, and especially Asano, who eventually responds by drawing his dagger and cutting Kira’s face. As a consequence, Asano was ordered to kill himself by means of “seppuku” (cutting the abdomen). At the death of their lord, Asano’s samurai retainers become masterless, or rōnin, and under the planning of Ōishi Kuranosuke Yoshio, Asano’s counsellor, 47 of these rōnin plot to avenge their former master. Because Kira suspects this, and spies on Ōishi, revenge is delayed as the rōnin disperse and assume other occupations, while Ōishi performs the life of a drunkard, visiting taverns and geisha. After a year and a half the rōnin return to Edo to stake out Kira’s house, and two years following Asano’s death they attack. Kira is eventually killed and his head is taken as an offering to Asano’s grave. The rōnin then turn themselves in to the Shogunate authorities. Having defied a Shogunate edict prohibiting them to avenge their master, but having followed the requirements of bushido in doing so, the rōnin are sentenced to death but allowed to die honourably by committing seppuku.

The Japanese government commissioned Mizoguchi’s filmic adaptation of this story during its involvement in the second Sino-Japanese War and World War II. The film was thus produced under the Film Law of 1939 – modelled on the Nazi “Spitzenorganisation der Filmwirtschaft” – which had extended government control over cinema, both in terms of regulating participation in the industry and limiting representations on screen (Hirano 1992). Mizoguchi’s film was based on the kabuki play by Seika Mayama, Mayama Chūshingura, and released in two two-hour parts in 1941 and 1942. The films were commercial failures but it was nonetheless awarded by the state. Unlike other “chūshingura” (fictionalised accounts of the 47 rōnin), it is a slow film that chooses not to depict key scenes of the story, such as Kira’s antagonism towards Asano, Ōishi hatching a plan for revenge, and the concluding seppuku of the rōnin. The story was surely commissioned for its sympathetic depiction of heroic self-sacrifice, however the lack of emphasis on such key scenes suggests an ambivalent approach to transposing the samurai ethic into wartime Japan. Self-sacrifice is upheld as a key principle, but we are also presented with the spirit of resistance of the rōnin and their fidelity to conscience (Broady 2014). During the U.S. occupation from 1945 to 1952, filmic adaptations of The 47 Rōnin were prohibited from exhibition, under the prohibition of feudalistic topics and themes, understood as opposed to the spirit of individualism. – Liam Grealy