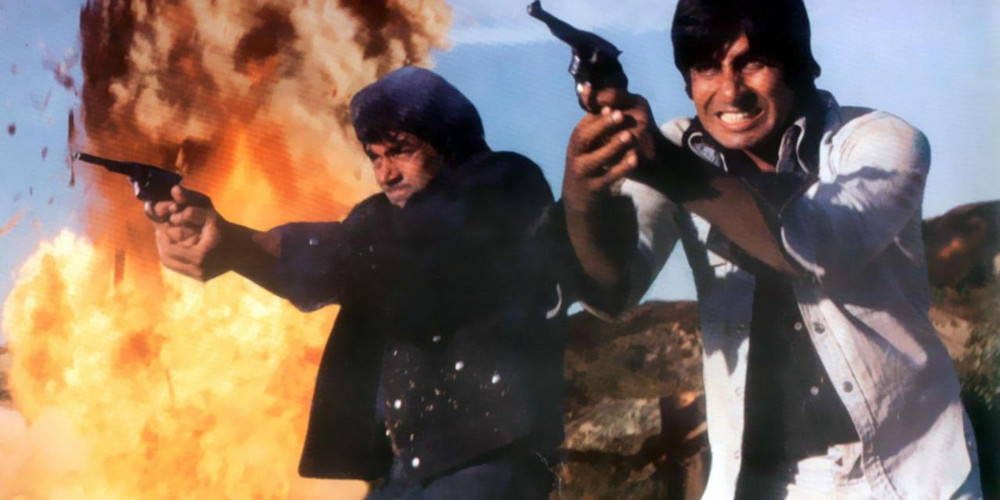 Amitabh Bachchan is the most famous actor of 1970s Hindi cinema and as the “angry young man” is emblematic of that era’s Emergency period. Adrian Athique (2012, 47) writes that,
“If the films of the 1950s had been characterized by the sympathetic portrayal of the ‘common man’ in rapidly urbanizing India, and the 1960s by the ‘romantic’ star, then the 1970s and 1980s were dominated by the rise of the vigilante genre.”
Bachchan starred in ten films between 1973 and 1982 written by Salim Khan and Javed Akhtar, in which his characters are traumatised as children and have little faith in the state or law (coincidentally, “bachchan” means “childlike” in colloquial Hindi). Such trauma, as in the 1973 film Deewar, often impels them to commit crime and seek revenge, sparking the era’s expanded production of violent action films. Film lore intimates that the 1975 blockbuster Sholay, released six weeks before the Emergency began, was allowed its violent sequences because of the close friendship between the Information and Broadcasting Minister Vidya Charan Shukla and its producer G.P. Sippy (Bose 2013). Nonetheless, director Ramesh Sippy (son of G.P. Sippy) was required to make cuts to numerous violent scenes, including the climactic finale.

Sholay was India’s highest grossing film of 1975 and of all time for the following two decades, running in Mumbai’s Minerva Cinema and elsewhere for five years from its release (Dissanayake and Sahai 1992). Widely characterised as a “masala/curry Western” Sholay is conventional of a “masala” blockbuster in combining conventions of the action, comedy, romance, melodrama, and adventure genres (Hariharan 1999). The plot features Bachchan as one of two thieves, Jai, alongside Veeru (Dharmendra). Their friendship is remembered fondly for the film song “Yeh dosti” (“This friendship”), which they sing to one another while riding a stolen motorcycle and sidecar, and which has been adopted by the Bharat Army (the Indian cricket team’s fanatic supporters) for its theme of masculine bonding. Veeru and Jai are enlisted by a retired police officer, Thakur Baldev Singh (Sanjeev Kumar), to capture the notorious dacoit (highway man or outlaw) Gabbar Singh (Amjad Khan). Gabbar Singh murdered Thakur’s family and cut off both Thakur’s arms, which are typically hidden under a shawl and only revealed to Veeru and Jai after Thakur is unable to defend them in a skirmish. Influenced aesthetically by the spaghetti Westerns playing in India through the 1960s, and like the plots of Akira Kurosawa’s Seven Samurai (1954), and John Sturges’ The Magnificent Seven (1960), Sholay involves the newcomers Jai and Veeru becoming increasingly imbricated with Thakur’s village, Ramnagar (built for the film), which they defend against dacoits who exploit the villagers for their grain. Veeru and Jai ascend from their criminal beginnings to protect the villagers they have fallen in love with, in particular Basanti (Hema Malini) and Radha (Jaya Bhadhuri, later Bachchan’s wife), and help Thakur to take revenge on Gabbar Singh.

Bachchan is memorialised in Sholay for his rugged masculinity fashioned in denim and flares. Alongside the happy-go-lucky Veeru, his character Jai was typical of his cynical “angry young man” persona, who sought justice outside of legitimate channels. For Jyotika Virdi, Bachchan’s roles as the angry young man represents Indian working class disenchantment in an era of rural to urban migration, the protracted all-India railway strike, the emergence of the Naxalite movement, food shortages, and inflation in commodity prices driven by the 1973 oil shocks:
“Always a subaltern figure – coal miner, dock worker, factory worker, porter, or slum dweller – the Bachchan figure challenged employers, factory owners, mafia men, and capitalist bosses either from his underdog position, or by rising to the top to vindicate past (inevitably familial) humiliation. . . . Unlike Raj Kapoor’s portrayal of earnest unemployed youth [in Shri 420], Bachchan played an urban ghetto product who barely concealed the rage simmering beneath a self-assured but melancholic persona.” (Virdi 2003, 107)
Echoing the move of Japan’s Shintaro Ishihara, Bachchan later pursued a political career, supporting his friend Rajiv Gandhi and winning the seat of his birthplace Allahabad, which he held from 1985 until his resignation in 1987. He reignited his acting and production career in the 1990s. Despite this, he is best known as the angry young man of the emergency period. – Liam Grealy