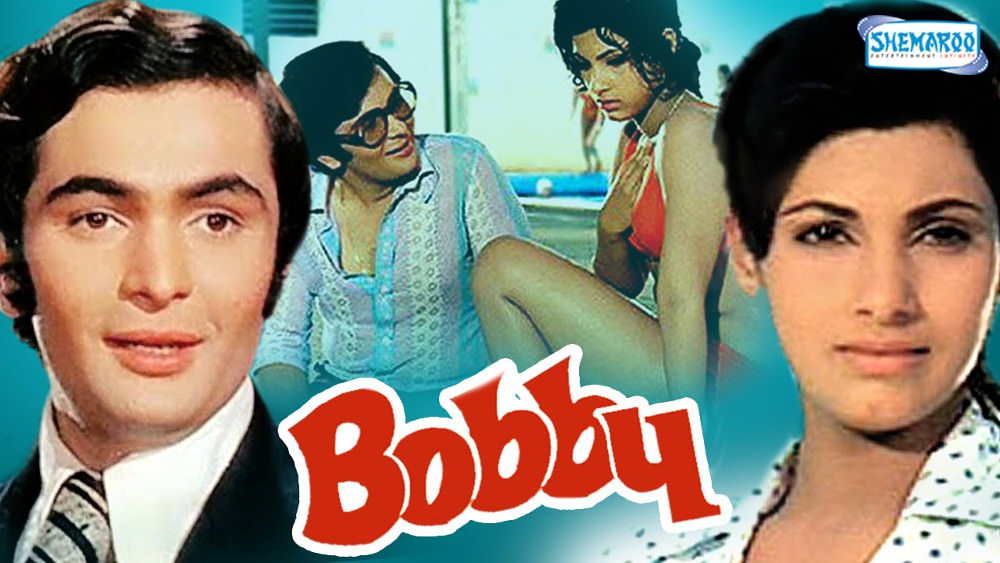 Directed by Raj Kapoor (of Shri 420) and launching his son Rishi Kapoor’s career as a leading man, Bobby was India’s highest grossing film of 1973. It is arguably the first Hindi teen film and it provided a template for teen romances throughout the late 1970s and 1980s. A 1973 New York Times review noted that Bobby’s “accent on youth is relatively new to Indian movies, whose performers are often older than the characters they portray” (Weinraub). Years later, Kapoor reflected on a line in an Archie comic which he remembers as expressing the sentiment “Seventeen is no longer young; we have a life of our own and we are aware of it!” (Nanda 2002). Kapoor claimed:
“Today’s children are not as they were twenty years ago. They are much more aware of their environment, of themselves. They are much more responsible than we were twenty, thirty or forty years ago. . . Thinking about this resulted in my making Bobby.”

With similarities to the first act of the 1970 U.S. hit Love story, Bobby is a romantic drama centred on the love between Raj (Rishi Kapoor) and Bobby (Dimple Kapadia). The teenagers’ class difference exemplifies a stratified Indian society, with Raj from a loveless, wealthy Hindu family and Bobby the daughter of a poor Christian fisherman. Nonetheless, Jyotika Virdi (2003, 181) suggests that the 1970s context is evident in the diminished significance granted to religious difference with the emphasis on class distinction: “Nath’s [Raj’s father] willingness to negotiate Raja’s marriage with Bobby so long as her father is a well-to-do businessman represents an emergent cosmopolitanism concerned exclusively with financial success.” Bobby’s Christianity is instead a useful conceit to justify her mini-skirts and her bikini, in the film’s most famous scene.

At Raj’s eighteenth birthday party, having returned from boarding school, he meets the granddaughter of his former ayah (nanny), Bobby. Raj’s father, Mr. Nath, is unhappy about his son’s interest in the daughter of a fisherman, and offers Bobby’s father money to prohibit their relationship, causing offence. Mr. Nath notes that the teenagers are minors and must reach the age of 21 to be legally married. He commands Raj to remain within the house, and Raj writes letters to Bobby, anticipating their approaching majority and romantic freedom. However, Raj’s father arranges his son’s marriage to another girl in order to strengthen his business ties. Virdi (2003, 180) suggests that there is an ambivalent relationship here between state and patriarchal forms of power: “The prohibition of the marriage of minors is used only to consolidate parental authority against the minor’s will”. Raj rejects this union and runs away with Bobby. A gang of men kidnap Raj and Bobby to claim a reward for their retrieval, and the fathers are forced to intervene after the gangleader turns violent. Following a speech about the distance between generations, Raj and Bobby escape by jumping over a waterfall, and are rescued by their fathers, who are finally willing to recognise their relationship. – Liam Grealy