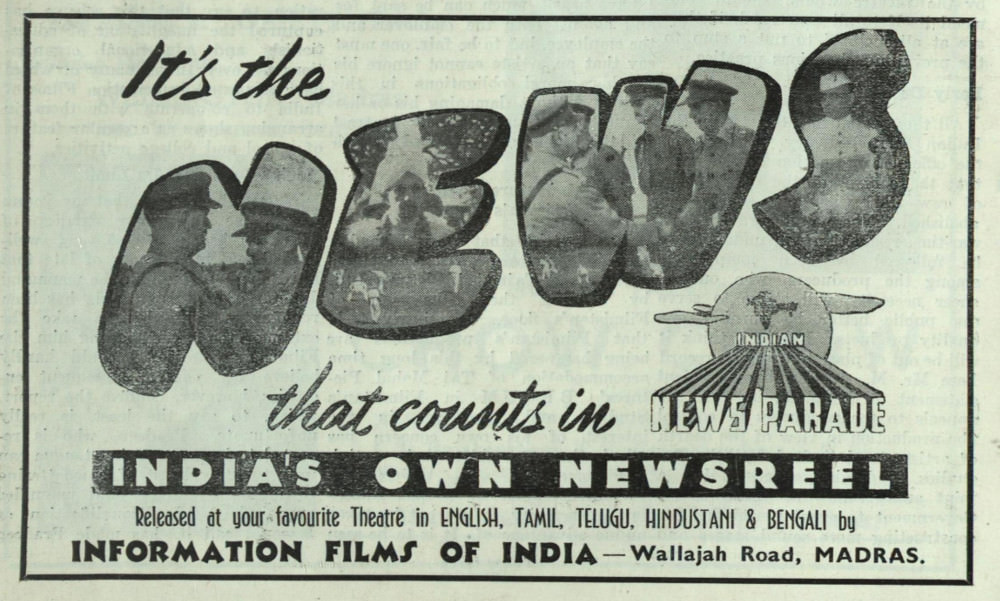 The British Government in India produced 126 issues of the weekly India News Parade between 1943 and 1946. Indian News Parade was preceded by Indian Movietone News, a production company established in 1942 by film producer Ambalal Patel and Sir Edward Villiers of the Films Division of the Ministry of Information. Indian Movietone News sought to produce newsreels that focused on Indian issues, as opposed to imported British and U.S. news. Indian Movietone News was subsidised by the government, which in May 1943 passed a directive under Rule 44-A of the Defence of India Act that required cinemas to show government-approved newsreels at movie screenings. From September 1943, Indian Movietone News was replaced by Indian News Parade, produced and distributed by Information Films of India. The Government of India Member for Publicity and Information, Sir Sultan Ahmed, noted that Indian News Parade “will serve no direct propaganda bias, but it will serve as a continual encouragement to our people by reflecting the war effort which appears in their daily lives” (in Sargent 1999, 29)

Indian News Parade produced both “documentary shorts” (1000 feet long) and “quickies” (250 feet long) in English, Hindustani, Bengali, Tamil, and Telegu (Bhattachararya 2001). These were exhibited in most of India’s 1400 cinemas at the time, as well as by mobile cinema vans and through the Village Publicity Scheme in rural communities. The content of the newsreels focused on the war efforts of Indian troops, as well as India’s religious communities and political parties, with notable issues including coverage of the Bengal famine (INP 55; 62) and the release of Mahatma Gandhi from Aga Palace (INP 62). Despite an India-centric focus as compared with newsreels produced by British and American companies, such as British Movietone News and British Paramount News, Indian News Parade was criticised as war propaganda, for promoting colonialism, for its slow pace and poor editing, and for its disconnection from most average Indians’ lives. Cinema owners resented being charged rental fees for films they were obliged to show (initially supplied free of charge), and which their audiences had often already seen (Garga 2011). Indian production firms were also required from 1943 to produce one “instructional picture” for every two entertainment films, in the context of state-controlled rationing of celluloid. Such films required approval by the Ministry of Information. Following WWII, the already unpopular Indian News Parade struggled to justify its continuing relevance as a news service and was shut down as a state venture in April 1946. – Liam Grealy