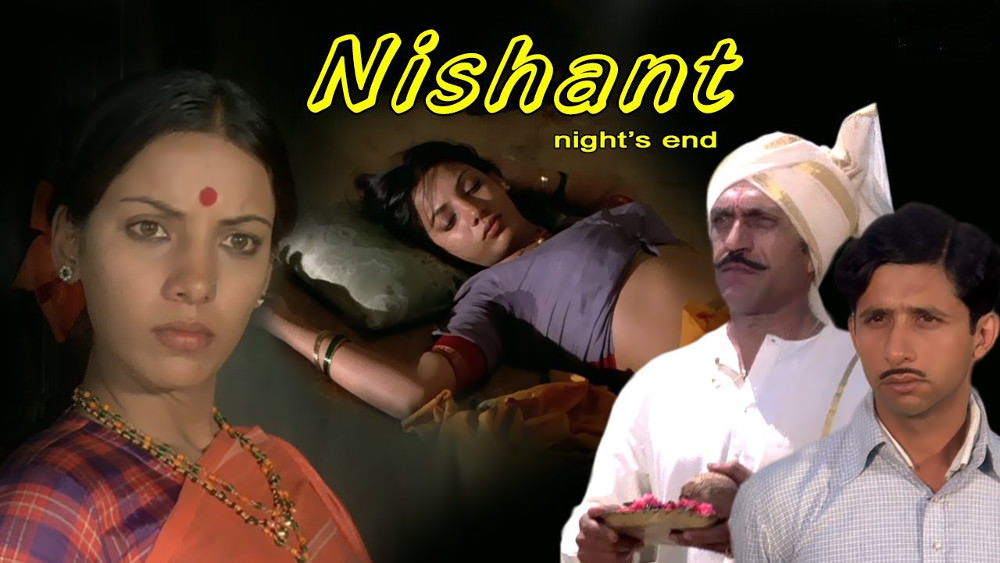 The second film directed by Shyam Benegal, Nishant (“Night’s End”) examined India’s “feudal” era, popularly understood to include the period until Indian independence and the dissolution and linguistic reorganisation of the princely states. In particular, it is a critical study of women’s position and sexual exploitation under that system. Benegal was born in Tirumalagiri, Hyderabad State (now Telangana), well known for its peasant revolt “Vetti Chakiri Udhyamam” beginning in 1945. An example of India’s “parallel” (social realist or arthouse) cinema, Nishant resisted the conventions of popular Hindi cinema, lacking a star cast and film song. It was critically lauded, winning the 1977 National Film Award for best feature film in Hindi and appearing at numerous international film festivals.

Nishant’s plot centres on the arrival of Sushila (Shabana Azmi), the urban schoolmaster’s wife, to an unnamed rural village. Sushila is abducted, raped, and held captive by two drunken brothers of the powerful Zamindar, common practice in the village. This occurs in full sight of the locals, cast as powerless to resist their feudal lords. After unsuccessfully pleading with the corrupt police, Sushila’s schoolmaster husband Nishant mobilises the villagers to take revenge and they murder their feudal oppressors. Represented as an out-of-control mob, they also kill Sushila and other innocents.

William Mazzarella (2013) notes that Nishant was delivered to the CBFC at the beginning of Prime Minister Indira Gandhi’s Emergency in 1975. Though its content focused on 1940s feudal rebellions, parallels could be drawn with the contemporaneous Naxalite movement. It was initially passed without cuts, though with the requirement of inserting an opening historical contextualisation – “In a feudal state . . . the year 1945” – to distinguish it from contemporary events. Nishant was then banned by the Minister of Information and Broadcasting V.C. Shukla, and subsequently had its certificate reinstated. Mazzarella suggests that this turn-around was underpinned by Gandhi’s support of “quality” cinema, such as Benegal’s previous film Ankur (1974), but especially to avoid international embarrassment as Nishant was collecting international film awards. It was also made possible through cuts made by Benegal himself, who had been concerned about its assessment during the Emergency and had removed all shots of blood and certain explicitly violent scenes. Upon Nishant’s recertification Benegal was required to insert expansive intertitles at the film’s opening and closure, such as the concluding: “The scenes depicted in this film relate to a period when India was not independent. Citizens of India today enjoy equal rights and status, and working together are moving ever forward” (in Mazzarella 2013, 98). Following the end of the Emergency, Benegal was advised that the titles could be removed. – Liam Grealy