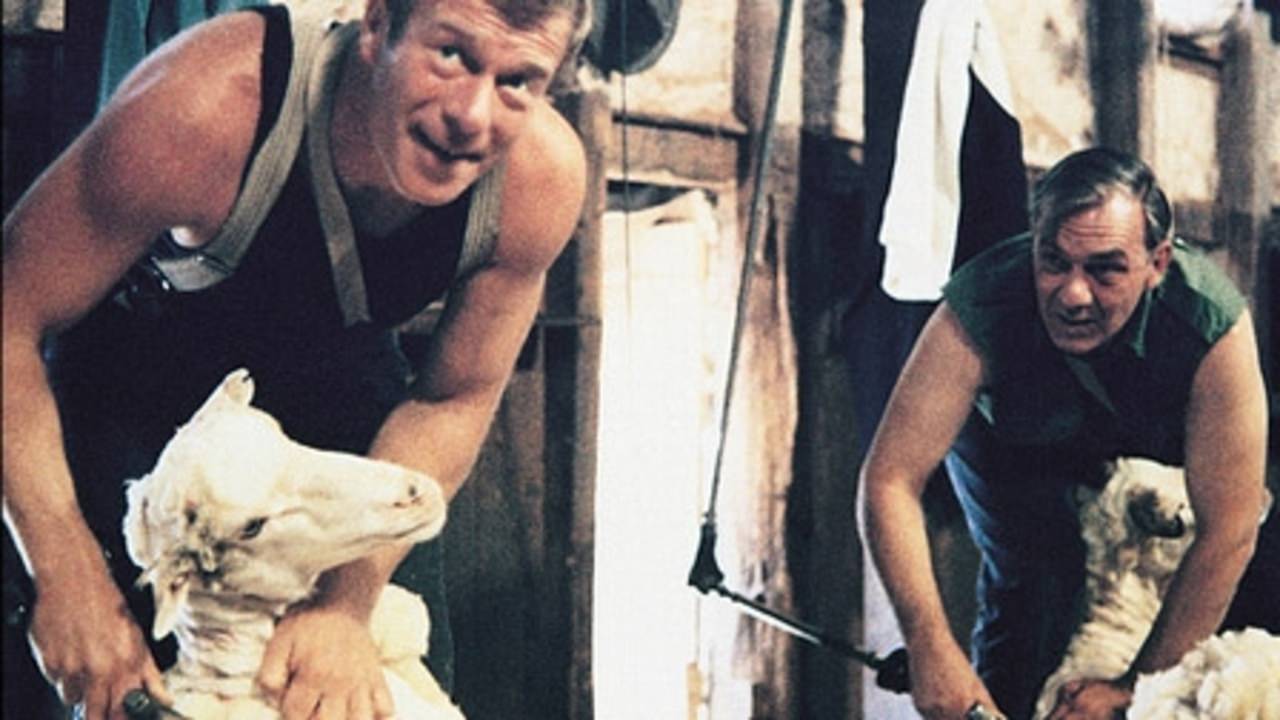 Produced by the South Australian Film Corporation and directed by Ken Hannam in 1975, Sunday Too Far Away is set on an isolated shearing station in Queensland in the 1950s. The film documents daily farming life in the lead up to a major shearers’ strike in 1956 which occurred in real life, affecting workers in three states. The main character Foley, played by Jack Thompson, and his fellow shearers are confronted with conflict upon the arrival of non-union “scab” labour at their station, conflict which manifests against a backdrop of masculine competitiveness and homosociality (Danks, 2008). According to Adrian Danks, the film is a blend of nuanced realism and drama, with aspects of “ocker” Australian comedy. It is something of an archetype for the “AFC genre”, a term coined by Elizabeth Jacka and Susan Dermody in 1988 to describe films that are  endorsed as “proudly Australian”, encouraged and/or subsidised by the Australian Film Commission. The film’s release and enthusiastic reception at prominent film festivals, were closely followed by Peter Weir’s iconic Picnic at Hanging Rock which garnered similar international acclaim. Sunday Too Far Away is therefore part of the Australian new wave of the 1970s, a turning point which saw a renewed interest in Australian feature film production (Danks, 2008). Such critical acclaim was not always matched by box office takings outside Australia, however (Stratton, 1980, p105).

Domestically, the Film Censorship Board (FCB) viewed the film in 1975 and determined the film M for mature audiences for commercial release in cinemas. They found the “sheer quantity” of the coarse language was used in context with the “emotional impact generated by the interpersonal conflicts” in this illustration of the daily life of a shearer. However, when it came to the film’s classification for television two years later, Board members were bound to different classification guidelines. The categories available for television were: G, for general exhibition, PGR, parental guidance recommended, and AO for adults only, unless content was deemed unsuitable for television (NST). Difficulty was located around the capacity for children to be exposed to coarse language in the home. Although it would usually be barred from television, the language was  deemed “an integral part of the film’s authenticity” in a film that represented considerable social and cultural merit. The FCB eventually decided the film could be screened as AO, either by eliminating some of the language or under the condition of a later time slot. The producers preferred to cut some instances of language rather than implement a later screening. The FCB ceased to classify film for television in 1986. – Rachel Cole

Notes: For information on the prolonged editing process of Sunday Too Far Away by Ken Hannam before the film’s release, see: Stratton, 1980, p101 – 105.